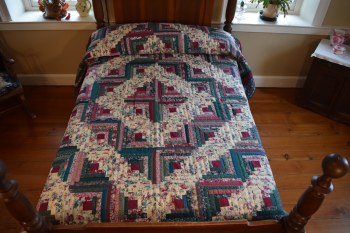 The Log Cabin quilt pattern is one of the most beloved and recognized of quilt designs. However, it may be both older and newer than you might think. While it’s natural to assume that this traditional block originated in the United States during the pioneer days, the origins of the block seem to go back much further in time and location. Similar designs have been found on ancient Egyptian mummies and in an English quilt predating 1830.

Log Cabin quilts first made a wide-spread appearance in the United States in the 1860s during the time of the Civil War. The block name may very well have had a connection to the presidency of Abraham Lincoln. The Log Cabin quilt became wildly popular and was identified with the pioneer spirit and values of America.

This product has not yet been reviewed.

Please login or register to write a review for this product.