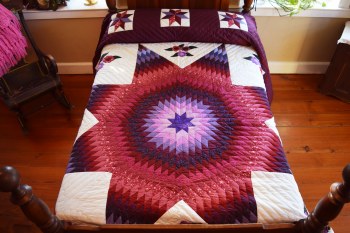 The Lone Star quilt block is likely one of the most recognizable quilt patterns to Americans. It is also one of the oldest patterns, along with the Mariner's Compass, Orange Peel, Job's Trouble and Irish chain. But this is a pattern known by many names. There are variations of it with 6 points, 8 points (the most common design) or even more.
Various Lone Star quilt pattern names are given to the pattern with a large central star, made up of diamond shaped fabric to form the star points from the center out. Often the colors are chosen and placed to form what appear to be concentric circles radiating around the center. It is placed in the center of the quilt top and can be appliquéd down to the background or pieced in. Sometimes other tiny stars are placed in the large blank areas surrounding the star, or flowers may be appliquéd in those areas.

This product has not yet been reviewed.

Please login or register to write a review for this product.